The International Centre on Aging (CENIE), constitutes the first initiative promoted jointly by the General Foundation of the University of Salamanca (ES), the General Foundation of the Higher Council for Scientific Research (ES), the University of Algarve (PT), the Directorate General of Health (PT). However, it should be noted that this initiative has as its precursor the project “Cross-border Space for Aging” and the collaboration on the ageing topic that those four partners have carried out in the recent years.

The Cross-border Space about Aging was a project started in 2011, and it has obtained significative results on the analysis and understanding of the aging process of the population and the problems associated with it. This project was co-financed by the Operational Programme for Cross-border Cooperation: Spain - Portugal, 2007-2013, and had as its partners to the General Foundation of University of Salamanca, the Associação de Apoio e estudo às Psicognosis na Raia Central (ASPSI), and the Associação Humanitária de Doentes de Parkinson e Alzheimer (AHDPA). It also had as strategic partners the Queen Sofia Foundation and the State Reference Centre for the Care of Persons with Alzheimer’s Disease and other Dementias, which belongs to Spain’s IMSERSO.

It developed an intense program of knowledge promotion, social awareness campaigns and a growing online presence through its website, Virtual Centre on Aging (www.cvirtual.org), with more than 500,000 visits since its launch. With all this, the project Cross-border Space for Ageing provides a solid base for the International Centre on Aging.

The promoting institutions of the Internacional Centre on Aging signed a framework collaboration agreement in February 2015, in which they identified the aging process as a strategic line for the four institutions and established a line of collaboration between them. 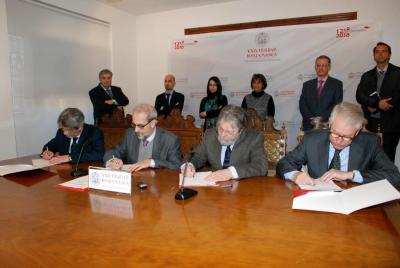 The result of this collaboration is the birth of the International Centre on Aging, which is committed to providing answers that will give to a society who will be able to see the life of its people prolonging, improvements on the necessary services to achieve a proper quality of life, sustainable economy to assist social rights, and opportunities to optimize the capacities of all the people.

With this goal in mind, the promoting institutions will work in order to build the bases of a common vision between Spain and Portugal, in the face of a new social reality.