According to the World Health Organization (WHO), the last century marked the beginning of one of the most transformative phenomena of our personal and social environment: the so-called longevity revolution.

And, since 1950, life expectancy has only grown.

In just 60 years, those that mediate from the date indicated to the year 2010, in the world population as a whole the average life expectancy has increased 20 years, which has allowed an average of 66 years to be reached for each inhabitant of the planet.

This trend, far from dwindling, will only increase in the next few years, anticipating that, in 2050, the world average will rise by 10 years.

Thus, if in the year 2000, around 600 million people were over 60 years of age, in 2050 this figure will be multiplied by more than three, reaching 2,000 million individuals above that age.

But this evolution is even more decisive if we observe what happens in not a few of the developed countries. In most of them, on the impulse of better health, food, hygiene and health, the vital ratio of the population already exceeds 80 years of age. Or what is the same: in such countries, life expectancy, in a short time span, has been multiplied by two, a condition that will only continue advancing from here to 2050.

On that date, and in practically all developed societies, there will be more people who will exceed the threshold of fifty years of age than those who are yet to reach it. And if we go beyond the date chosen as a reference, and add one more generation, the reality will be even more overwhelming and unusual: the largest population group will be made up of people over 60 years of age.A new determining factor joins what has been described so far: the coincidence of the increase in life expectancy with that of the unstoppable decline in fertility, especially in developed countries. 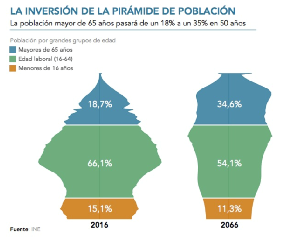 The confluence of both phenomena generates a definitive modification of our population profiles: yes, just a few decades ago, the distribution of the population generated more or less regular pyramids, with a majority percentage of children and young adults, the projection towards a future - which is already, in good part, our present - derives in a totally different geometry, more tending to a rectangular profile (see graphic corresponding to Spain).

A demographic transformation such as the one described above will, worldwide, have extraordinary effects. It will necessarily force changes unknown until now - both conceptual and procedural - and will place the planetary society in front of a panorama, unknown, urged for new responses - also for new open and hopeful visions - that will affect all levels of the community: personal, social field; from the politician to the economic; from educational, to cultural ...

The assumption of this global challenge must move away from what some pejoratively call "gray tsunami", undoubtedly contaminated by sterile pessimism, which seems to be exhausted in the simple description of a reality full of dire omens.

Such a conceptualization must be overcome with haste. The prolongation of life expectancy and its consequence, which is the longevity of the population, is one of the most explicit signs of our progress. One of the most extraordinary achievements of our wandering civilization. A new paradigm that does not require vain and catastrophic alarms, of imposing longings, but of actions based on knowledge, study, analysis, research, information exchange, the sum of creative talents or the implementation of experiences relevant that build the new responses to a situation that never happened before. But that, we insist, is still one of our most formidable advances.

It is inexcusable to be based on the potential of what longevity means - which is also that of the essential value of experience - to, from this, continue to build a more inclusive and balanced society, in the happy and new coincidence of living together, in the same time, five generations, what has never happened - and even less as a universal phenomenon - in the history of Humanity.

A shared reality: Spain and Portugal 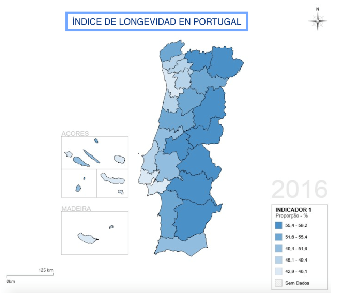 Spain and Portugal are part of the group of countries with the long-living population, in a sequence that has only increased in recent years: in 2016, people over 65 represented 18.79% and 20.79%, respectively in each of these two countries. And, by the year 2050, in the set of both nations, the projections raise the percentage to thresholds above 32%.

If we look at the cross-border regions of Spain and Portugal, we will observe an even more significant and pressing reality: the longevity index (percentage of people over 75 years of age in relation to those who are over 65 years of age living in a territory) in Portuguese cross-border regions it exceeds 50%, reaching 60% in some of them, such as in Beira Baixa and Alto Alentejo. That is, of every 100 people over 65, almost 60 exceed 75 years.

Nothing different happens in the Spanish cross-border part.

Why a Program for a long-living society?

The premise on which our Program for a long-living society starts is based on the committed and constructive decision to face the longevity of life as one of the strengths of future society.

The mission of the Program for a long-living society is based on the need to promote, accelerate and implement research and scientific discoveries, technological advances, behavioral practices and renewal of social norms so that the life of long-living people does not only imply a healthy existence and rewarding for them but, and at the same time, for the society to which they belong. Moreover, that being long-living is identified as one of its most significant vectors of growth and improvement in many fields of community life.

Longevity, as conceived and formulated in the project, is not equivalent to withdrawal, inaction, complete absence of participation, utility or productivity - understood not only from the strictly economic conception - but, rather, everything On the contrary: longevity understood as the moment of life in which what has already been learned becomes a true social capital, transferable to the community as a whole.

That what is already known by people and society, is as valid for both as what remains to be learned. Where people remain moved by projects, by ideas of renewal, by the legitimate aspiration to a better life, by the essential vitality of illusions.

Only then will social relations be expanded and enriched. Only in this way will the achieved prolongation of life not only be the effect of an organic or biological behavior, but also the horizon in which people - and the community to which they belong - can continue to wish to develop their projects, undoubtedly aware of their limitations. (there is no age that does not have them), but equally knowledgeable of its immense potential.

To inspire large-scale changes, the Program for a long-living society wants to work with both the Public Administrations and the private initiative; with universities and research centers; with institutions representative of social, economic, political, educational and cultural reality. With those industries and companies especially focused on the generation of products and services conducive to our transformative objective. With the technological world, from which many of the tools to incorporate into our new population reality will come. Also with the media, whose work is decisive in the dissemination of new concepts, of new activities that, in favor of a more prosperous and innovative longevity are developed in the world, as well as with all kinds of communication networks that, Based on the impact that the new media make possible, expand the reality of the project as widely and intensely as possible.

The project wishes to be a field of experimentation for collaborative culture, for permanent dialogue between fundamental actants, often, isolated or unconnected. Only in this way will it be possible to achieve the objective we intend, since there is no point in efforts that are never known, which are hardly noticeable; or actions exclusively based on goodwill, in an activism that does not obey reflective planning or a constant and rigorous evaluation.

The Program for a long-living society means betting on innovation. For creativity in the search for new answers. To assume the concept that encourages the project is to become a participant in a transformation process in which the duration of life is accompanied by the extension in its quality.

And that process does not tolerate delays.