Photo contest: "A Janela" becomes the winner of the CENIE Grand Prize

The photography competition "Age doesn´t mean getting old, just growing older", held throughout 2019, and which was a success in terms of participation, having presented a total of 7,617 works from 103 countries, closes its cycle with the presentation of the winners of the different prizes and categories.

With a total of eight prizes ranging from 1,250 to 5,000 euros, the winners, from as diverse backgrounds as the participation obtained in the competition, have exhibited their work, managing to stand out from the rest and being evaluated by a professional jury that respected and followed the guidelines indicated in the rules at all times.

The photographs chosen not only meet the required criteria but also stand out for their quality and vision of what this competition means. The winners are:

This photograph has been chosen as the winner of the CENIE Gran Prize for its geometry, cleanliness and dynamism. The triangular lines that form the architecture make the viewer focus on the space and the silence. The human being in the background, who moves away, gives us a sensation of softness due to the different lights that are turned off at the same time as leaving the image open to free interpretation. It is a photograph that anyone would like to take with their camera, because of its delicacy. 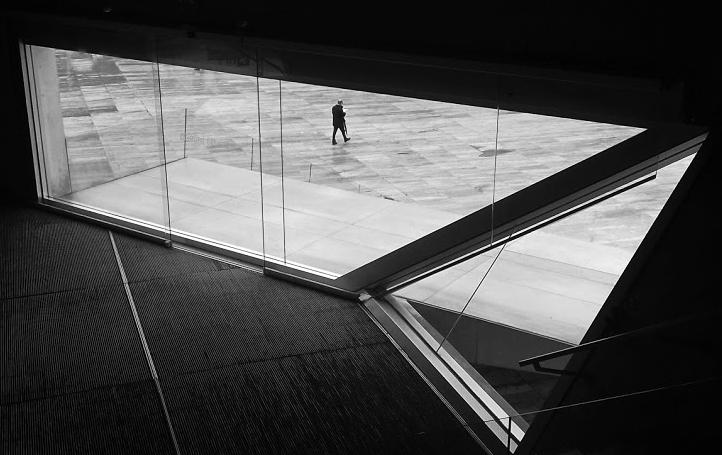 Photography takes us on a journey through our future, in company, with calm and tranquillity, without great colouring and with the tranquillity that comes with the years. A magnificent photograph for a magnificent choice of the public. 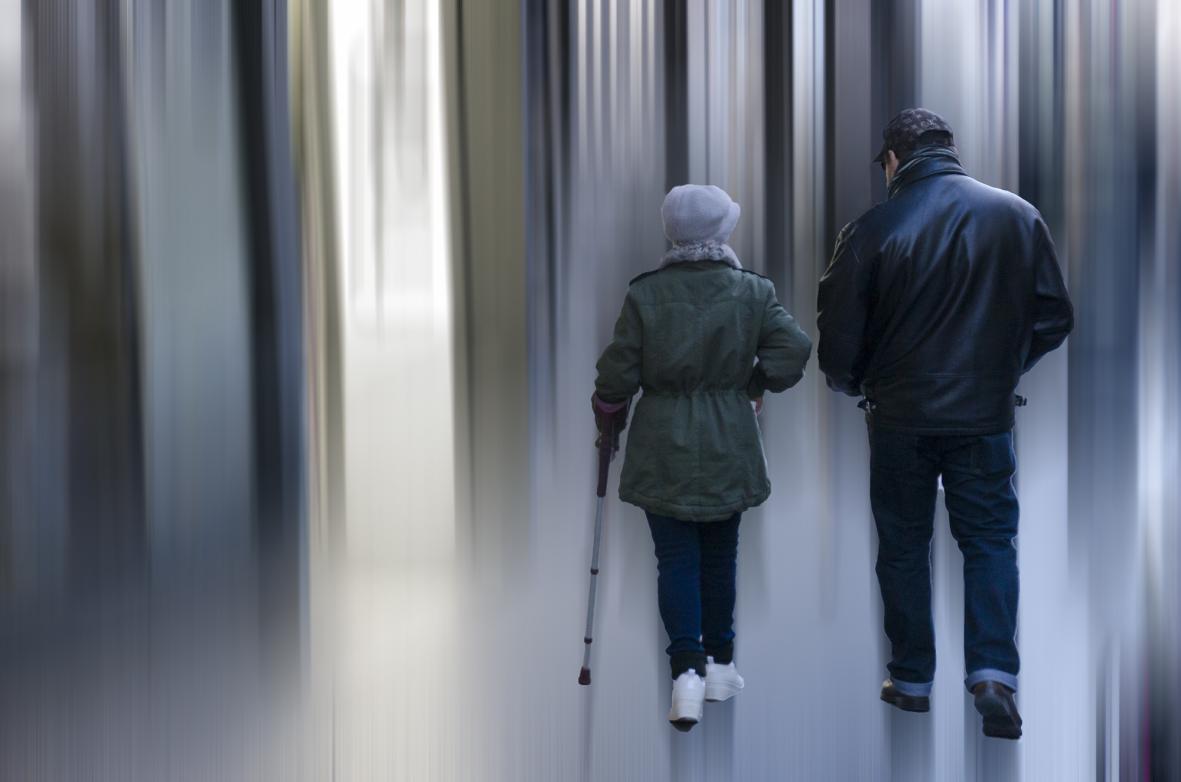 The atmosphere in soft tones, blue and white, provokes a sensation of well-being, quietness and serenity. A couple looks at the wide horizon on which an island can still be reached, while above them the garlands of lights speak of life still being a sweet celebration. 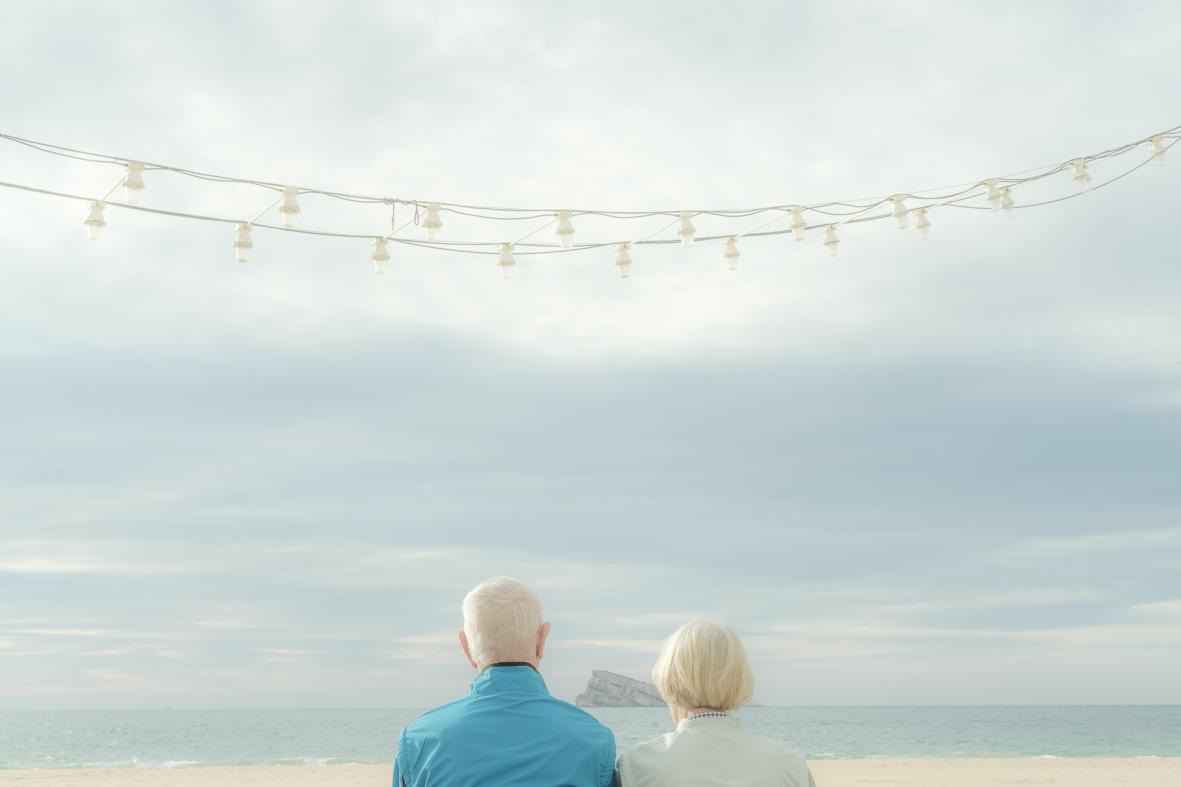 Behind the black and white reflections, a glance at the infinite number of memories and nostalgia melts. 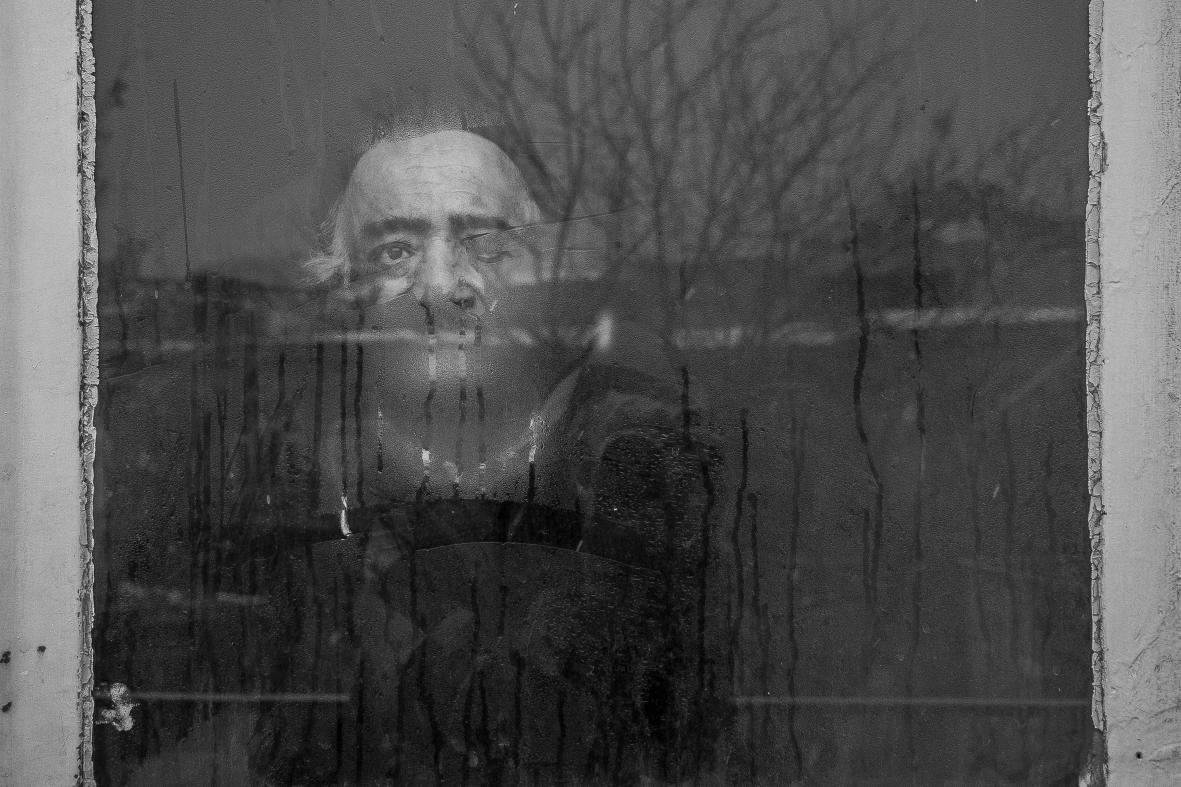 With the strength of the fog, delimited by the intensity and dimension of the greys, we can enjoy the scene of this character feeding the birds, while the rest of the people get lost in the infinite. 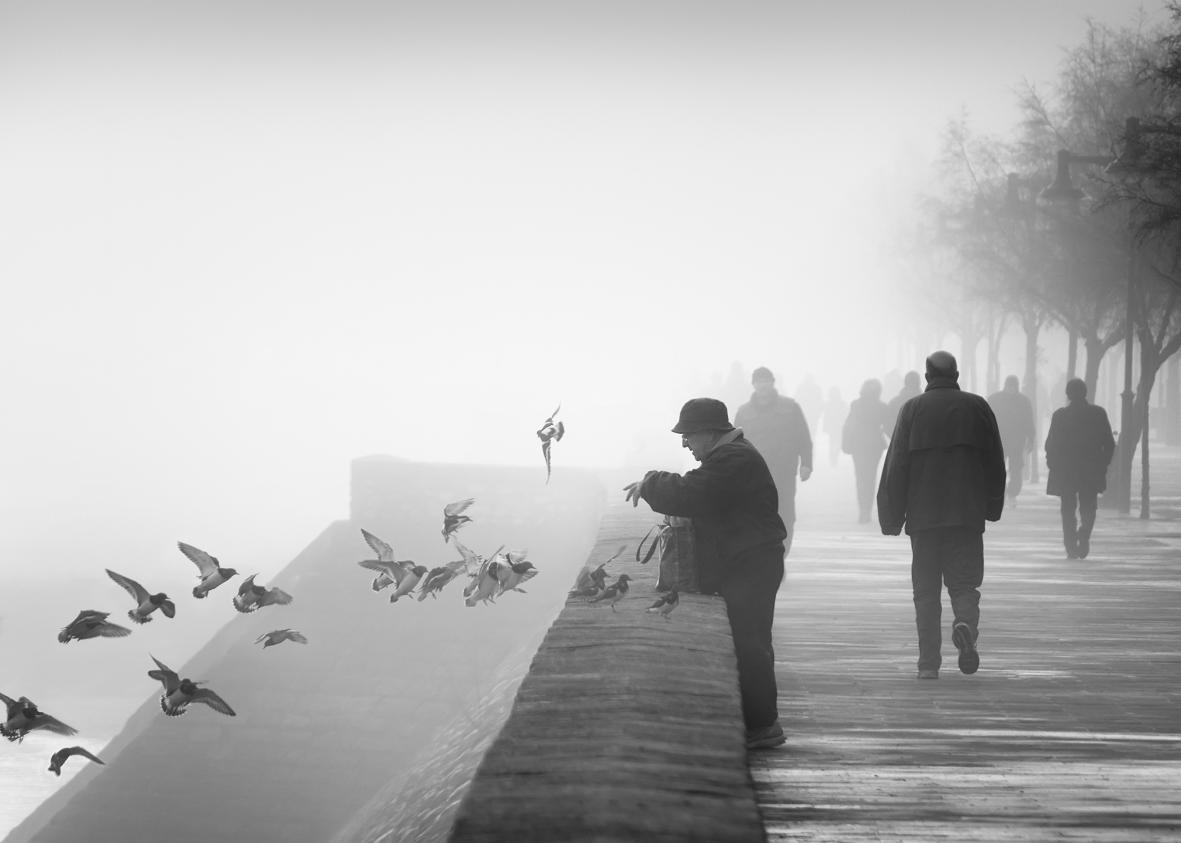 Looks at the line - Recuerdos I (David Martín Pinto)

It's not easy to photograph feelings. In this image and behind a small photograph, many memories, much delicacy and much love are written. The simplicity of black and white at the service of nostalgia. 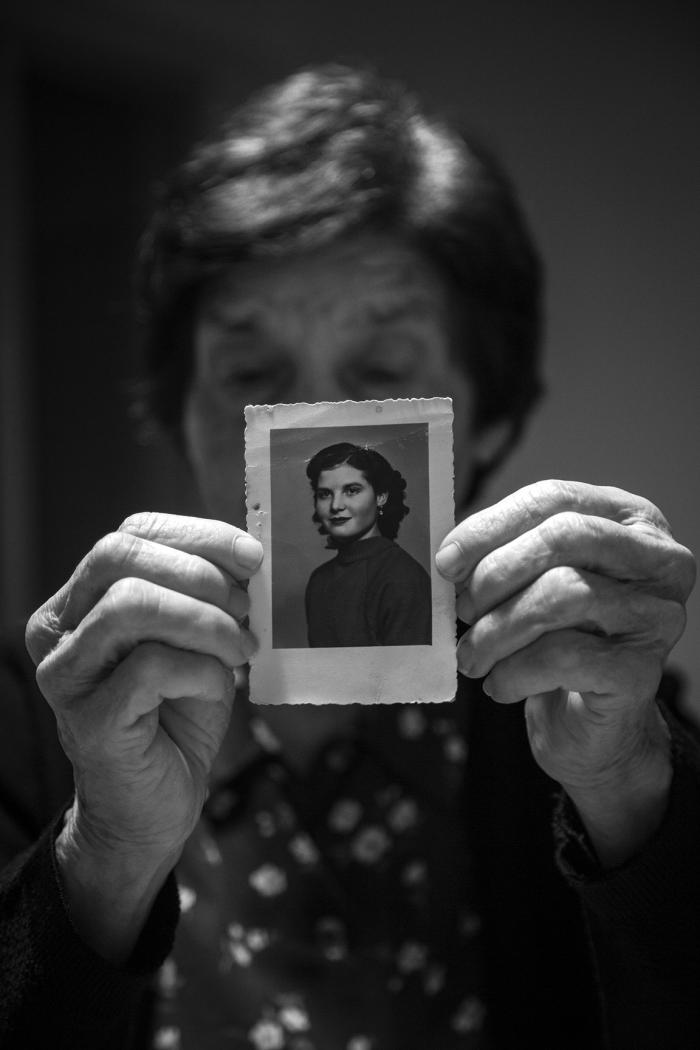 We found this photograph inspiring... As if one could sunbathe on the moon and only the woman's body would be affected by the sun that was coloring it. We can see her feet still grey, belonging to that cold lunar space. We don't know if she was in that warm colour and the icy lunar beach is taking hold of her turning her into grey, or if everything was black and white and the sun has been painting her with its warmth and has not yet reached her feet which will soon also be filled with warmth. 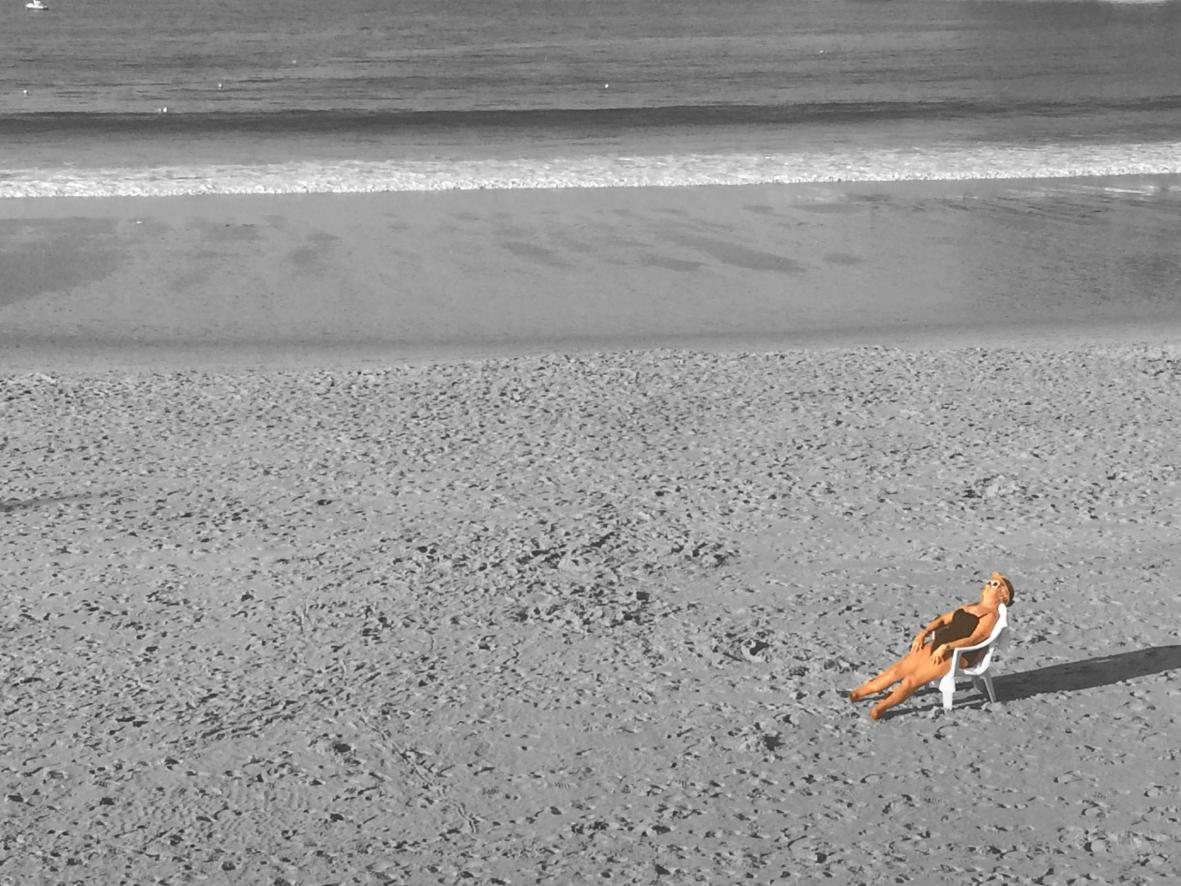 The photograph quickly connects with the viewer, with that division of the sky and the earth, fusing the black and white of the sky with the blue of the water and allowing the author to focus the viewer's gaze on the back of the image, through those two planes that form the two dark figures of the tree and the boat, in search of the beam of light from the sea. 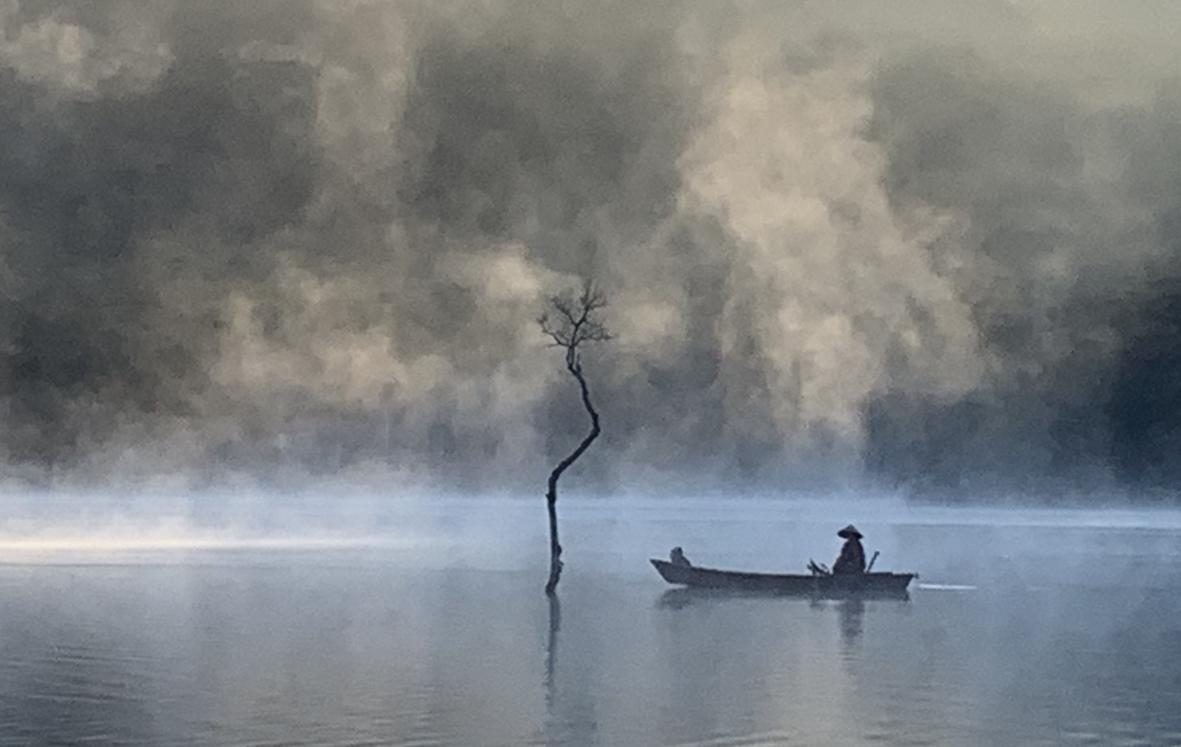 The jury in charge of evaluating each of the photographs submitted to the competition was Ouka Leele, together with Carmen Dalmau, Miguel Oriola, Carlos de Andrés, María Santoyo and José Luis Amores. Below we present each one of them and their professional career.

Ouka Leele. National Photography Award. Photographer and Artist with an extensive national and international career. With work in amounts institutions and public and private collections.

Miguel Oriola: Since his first exhibition in 1971 he has held countless exhibitions in national and international galleries. His work is present in public and private collections. In 1980 he founded and directed the magazine POPtografia. He has collaborated in publications such as Vogue, Elle, Cosmopolitan, Tendencias, El País, Vanidad, German Play boy etc.

Carlos de Andrés. Photographer and reporter. Works for the most important national and international publications and Getty Images. His work has been presented in more than 60 exhibitions around the world. Winner of scholarships from La Caixa, Unicaja, Bankia and Mapfre. With work in important institutions and Museums around the world.

José Luis Amores: Director of EFTI. International Centre of Photography and Film. Editor and curator of exhibitions. He has participated as a jury in a hundred contests and scholarships.

This activity developed by the General Foundation of the University of Salamanca, within the framework of the International Centre on Ageing (CENIE), is part of the INTERREG V-A Programme, Spain-Portugal, POCTEP, 2014-2020, of the European Regional Development Fund.